Much has been written about blockchain as an emerging technology in many industries, and shipping specifically.

Although still largely in the piloting and exploration stages, blockchain has the potential to serve the complexity of the supply chain and the real-time requirements of contemporary business.

However, thinking of blockchain in solely technological terms can become quickly overwhelming, especially when your business is faced with adopting blockchain or feeling as though you’re falling behind.

So, rather than get caught up in the technicalities of blockchain, let’s examine the more philosophical aspects. 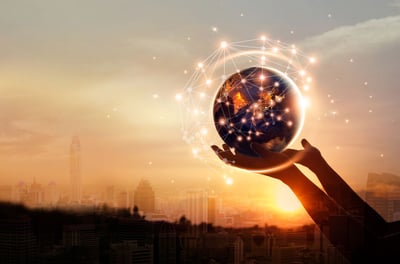 At its most basic, blockchain is a ledger. All throughout the supply chain of, for example your product, transactions are being written onto a ledger.

The major difference from an old-fashioned paper ledger is that blockchain is distributed and decentralized:

Blockchain is not the only Distributed Ledger Technology (DLT), but it is one of them, and perhaps the best known in our industry.

Some of the most exciting aspects of blockchain include:

Proponents of blockchain technology refer to it as a way to approach business as a whole. It encourages collaboration in real-time (or near real-time) and fosters trust and transparency between partners.

So, what are the drawbacks? Some of the criticisms of blockchain technology include:

Blockchain as a service

The most relevant example of blockchain in the shipping industry is Tradelens, a collaboration between Maersk and IBM.

However there are other cloud-based providers offering blockchain, including Amazon/AWS, which offer simple and inexpensive tools. Blockchain can be used at smaller scales--it’s not just global shipping giants, it can be your own network of trade partners and collaborators.

Subscribe to our blog to today to learn more about this and other trending logistics topics.

Keeping you in the loop. It's what we do.